In order to attract new customers, or retain existing ones, the Pic du Midi de Bigorre complex is not lacking in imagination.

This time, this Lannemezan-based firm is going to working on three innovations that will make the site more attractive. The first of these is the “Hyper-belvedere”, whose on-site work starts in October 2017. 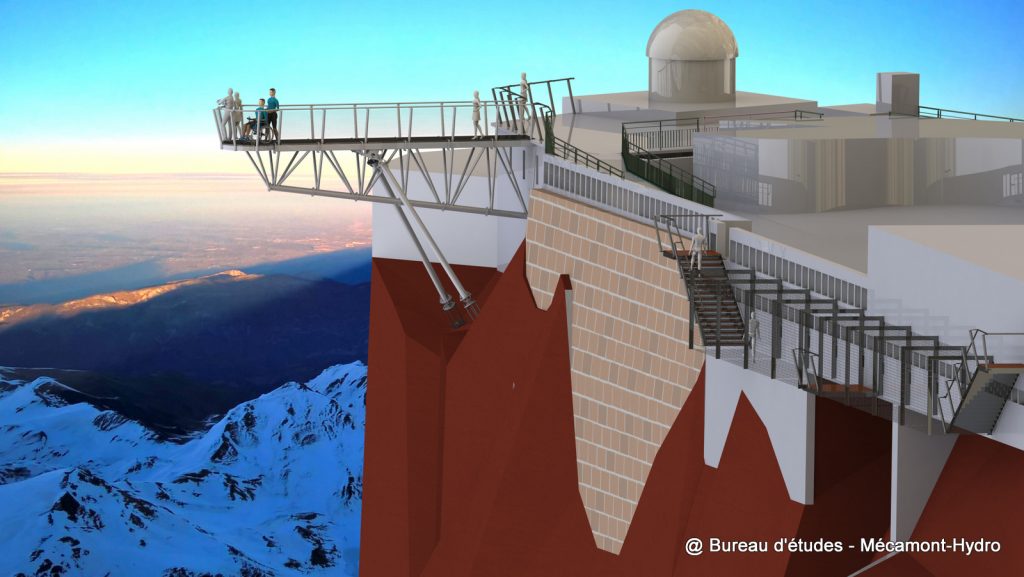 The structure, extending from the north-east terrace into the void over a dozen meters, will be subjected to extremely harsh conditions (wind, cold, ice packing…).

Based on the existing technical, industrial and scientific constructions that are part of the culture of the Pic du Midi site, the Hyper-belvedere has been designed as a “aerial” structure.

Apart from strong sensations, the footbridge will allow users to observe the landscape and the site from an original angle.

Unlike the “one step into the void” glazed cabin on the Aiguille du Midi in the Alps, users will be in the open air up here. The footbridge is intended to accommodate visitors, even those with reduced mobility. 1000 m below, it will overhang the North-East corridor – a great place for anyone looking for some serious vertiginous skiing.

On this worksite, Mécamont-Hydro use their skills in the drawing office, in the field of engineering, as well as fabrication and assembly on site by helicopter, and all this under strict quality controls and complicated working conditions.

This tourist redevelopment, designed to enhance the site’s attractiveness, is part of an important 4.5 million project co-financed by Europe, the French State, the Occitania region (the Pic du Midi is a large site of the former Midi-Pyrénées region) and the department of the Hautes-Pyrénées.

With this aerial steel structure, Mecamont-Hydro demonstrates its know-how from A to Z, touching the sectors of design, construction and assembly, in an extremely harsh environment.

*The company is not on unknown territory, as Mécamont Hydro was at the origin of the installation of the lattice tower on the Taoulet – Pic du Midi section during the complete renovation of the site that took place in the late 90’s and beginning of the 21st century.